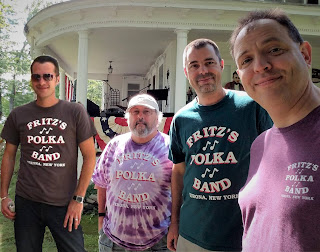 Fritz's Polka Band from Verona, NY along with special guests, Rocko Dorsey and Rick Szczyt will be returning to

Cleveland, Ohio for the Thanksgiving Polka Weekend, November 29-30, 2019.  This event will be held at the Cleveland Marriott at Key Center (127 Public Square) in Cleveland. FPB is scheduled to perform on November 29th at 5pm and November 30th at 7pm. In addition, the FPB will be guest presenters in the Sideman of the Year category during the Cleveland-Style Polka Hall of Fame Awards Show at the Marriott during the afternoon of November 30th.

"As the two remaining founding members of FPB, my brother in law, Gabe Vaccaro and I are anxious to return to
Cleveland for this event along with Rocko Dorsey and Rick Szczyt and perform twice as part of the Thanksgiving Polka Weekend and then present some awards during the Awards Show," said Fritz Scherz, bandleader of Fritz’s Polka Band. "With my band being nominated in the “Band of the Year” category, and FPB original tune, Fred’s Polka, which is the last song written by my Dad, the late Fred Scherz Sr. being nominated in the “New, Original Song” category as well as me being nominated in the “Musician of the Year” and “Button-Box: Artist or Duo” categories, this weekend is really going to be very exciting! As with the last two years we played at this event, Rocko will once again be a special guest guitarist. He’s quite the talent, too, as he has been featured before on the Gretsch Guitars’ website! As an extra treat this year, Rick Szczyt, who drummed in FPB for 24 years will be performing this weekend with us! Rick is an amazing talent too, as he has been nominated before for multiple national awards! We’ve got some surprises planned, too, for the friends going with us!”

October 14, 2018 marked the 40th anniversary of Fritz's Polka Band! FPB made history in 1999 by becoming the first polka band to play at a Woodstock Festival.  FPB appears on "The Manchurian Candidate" DVD, released in 2004.  In 2011, Fritz's Polka Band had two songs (‘Grandparent’s Polka’ and ‘Here Is Fritz’s Polka Band’) included in two episodes of the TV show, ‘Breaking Bad’.  In November 2018, FPB released their 19th recording, “Hey!” which featured Rocko Dorsey, Ron Keck, and Todd Kerns (from Slash featuring Myles Kennedy & The Conspirators, TOQUE, Age of Electric and more!) as special guests!

Fritz's Polka Band (FPB) from Verona, NY recently wrapped up a five gig, four date residency in Nashville, TN! From November 7th -10th, FPB performed once a day (except for twice on November 9th) at the Bavarian Bierhaus, located at 121 Opry Mills Drive.

“This marked the first time in the band’s 41+ years that we performed in Nashville,” said Fritz Scherz, band leader of Fritz's Polka Band.  “I had never been to Nashville before and truth be told, never thought my band would perform there. When this opportunity presented itself, it was like a dream come true! I’m grateful to the owners and staff at the Bavarian Bierhaus as the venue was truly special and we were treated great! While Nashville is obviously big on country-style music, I’m proud to say that despite hardly playing any country music during our residency, my band went over well and folks seemed to enjoy our eclectic style of tunes!”

October 14, 2018 marked the 40th anniversary of Fritz's Polka Band (FPB)! FPB made history in 1999 by becoming the first polka band to play at a Woodstock Festival.  FPB appears on "The Manchurian Candidate" DVD, released in 2004. FPB was inducted into the Syracuse Area Music Hall of Fame in 2010.  In 2011, FPB had two songs ‘Grandparent’s Polka’ and ‘Here Is Fritz’s Polka Band’) included in two episodes of the TV show, ‘Breaking Bad’. In 2013, FPB released their 18th recording, a double live CD entitled,“The WSKG Sessions”. In August 2018, FPB and each band member were again nominated for national awards by the Cleveland-Style Polka Hall of Fame (CSPHOF).  A few months ago FPB and FPB namesake, Fritz Scherz were again nominated for national awards by the CSPHOF.

Thank You Re: my 9th Annual Thank You Dinner for Town of Verona Veterans 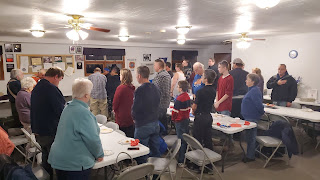 Many heartfelt thanks to everyone that helped make my 9th Annual Thank You Dinner for Town of Verona Veterans on November 11th a success!  Thanks to Diane & Melanie Angell, Paula Bishop, Diana Dodge, George Eggen, Bernie Happle, JoAnne Makarchuk, Linda Rogowski, Marion Tallman and Pastor Katie Yahns of St. Peter’s Lutheran Church for helping out as well as Freihofer’s, The Hotey and the media that helped publicize the event.

Thanks to the Verona Veterans of Foreign Wars Post 6811 for providing the venue for the Thank You Dinner.  Special thanks to my wife, Kathy, and daughters, Katherine and Marissa as well as son, Freddy for being so supportive and helpful before and during the event itself. Thanks to Town of Verona Veteran, Frank Buda for playing accordion and honoring all branches of the military by playing a special musical medley.

Last, but certainly not least, thanks to the Veterans and their families that attended.  Your service and sacrifice to our great country will never be forgotten!  I am so honored to call these great people my friends and Verona my hometown!

To see some photos from this Thank You Dinner, please go to my website:  www.fritzscherz.com