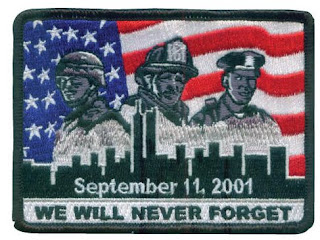 On September 11, 2010, I wrote the following "letter to the editor" and submitted it to a few newspapers. While it's now technically two years old, I still find that I agree with what I felt at that time. Time might heal some wounds or lessen the pain, but the words "never forget" hold true. (Please note:  I changed the original "9" at the beginning to an "11" to allow for considering our current year when referring to "years ago" and changed the "2010" to "2012".)
11 years ago, I was at work in Albany at the Office of the NYS Comptroller attending a training class when the 9/11 tragedy happened.  Obviously, people were stunned, saddened, scared, confused, and a whole lot of emotions mixed together.  Shortly after the first tower collapsed, we were told that non-essential people (like me) could go home. So, I left.
I remember leaving Albany and how slow traffic was going as well as how congested the roadways were, yet how polite friends and strangers alike had become.  Traffic on the thruway was a lot slower than usual.  I didn't see any road rage whatsoever.  I remember the goosebumps I got as well as tears in my eyes when I encountered firetrucks heading east (toward NYC).  In the few days that followed, our Nation had become one, if you will.  Gone were the vitriolic comments, gone were the democrat vs. republican issues, gone was the "usual behavior" of many. We were actually united, or at least it seemed that way.
Jump to 2012 and the way things are now.  What the heck happened to our country? Why so much derision?  Why so much vitriol?  Why so much corruption?  I just don't get it.  But, I am hopeful we can get back to being more united sometime soon.
Anyway, today I say a prayer for the men and women (of all nationalities) who were killed or injured in the 9/11 tragedy and to those who lost family or friends (in many cases, both) on that tragic day.
God Bless America